Various types of Face Masks and Which one is good for us. 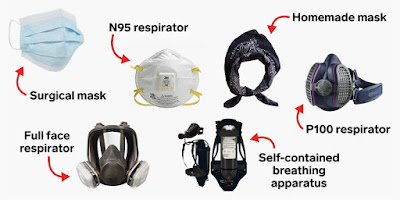 Coronavirus (COVID-19) has been one of the biggest medical scares in all of Indian history. As a country, we need to do everything we can to combat the spread of this virus. During the COVID-19 pandemic, the Centers for Disease Control and Prevention (CDC) and World Health Organization (WHO) strongly recommend that people wear face masks to cover their mouths and noses while they’re out and about at the grocery store or any other public area.
You may be getting a lot of mixed messages about what’s safe, and while I am not a medical professional, I am Just giving information about the best type of face mask covering to use is, and how to wear one effectively.. 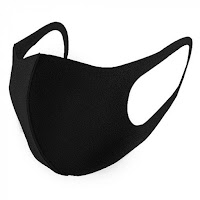 This is your standard, everyday version of a face mask. It’s also the version recommended for public use in the midst of COVID-19. You can wear this type of face mask while going to the grocery store, gas station, or any other open public place. 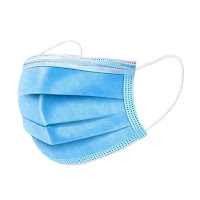 An FDA-approved surgical mask is made from a thin, disposable material. Medical professionals who are currently operating drive-thru testing for COVID-19 are wearing a version of this face mask that covers not just their nose and mouth, but also their eyes, cheeks, and forehead. You’ll also see this type of mask worn in hospitals by doctors and respiratory therapists. 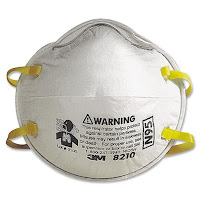 You won’t find N65 Respirators worn by the general public. This type of face mask is critical for health care workers and medical first responders. Please don’t use/purchase this type of mask if you are not working directly with patients. Supplies are scarce right now, and these masks need to be reserved for those who really need them. 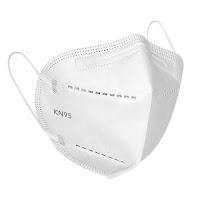 KN95 masks are very similar to N95 masks. Both capture about 95% of tiny particles in the air. The biggest difference is that N95 masks are able to capture larger particles. 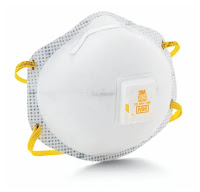 Like surgical masks, this type of face mask is disposable. It’s not commonly used to stop the spread of airborne illnesses, but rather is worn to decrease exposure to particles that come from wood dust, animal dander, and pollen. Those with allergies might consider using this type of face mask during the pandemic. 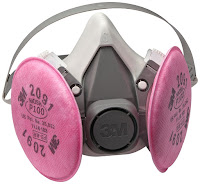 A P100 respirator isn’t commonly associated with healthcare. It’s instead worn by painters, woodworkers, and anyone who may be in contact with lead, asbestos, or chemicals. You shouldn’t wear this type of mask to prevent the spread of COVID-19. 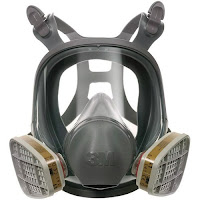 Do you have a hard time breathing in a cloth or surgical mask? A full face respirator, which is typically used for home improvement projects, may be a good choice for you. This type of mask, however, should be reserved for those who already have breathing problems or respiratory issues. 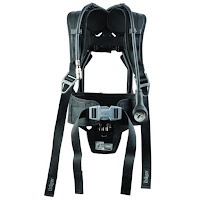 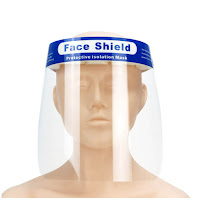 This is a mask that’s a flimsy, plastic version of the glass ones you see worn by welders. It covers the entire face from forehead to chin and secures with a cushioned headband. For the most part, a full length face shield isn’t ideal during the COVID-19 crisis as it’s tough to breathe in over time.

Over the next few days, as we continue to battle the global fight against COVID-19, stay home and stay safe. Follow social distancing requirements, and minimize unnecessary trips to public places, even if obtaining essential services. Together, we will flatten the curve of COVID-19 and recover as a world from this deadly and devastating illness.
😊"Be Happy Be Safe"😊

10 Most Popular Entertainment Websites in India 2020 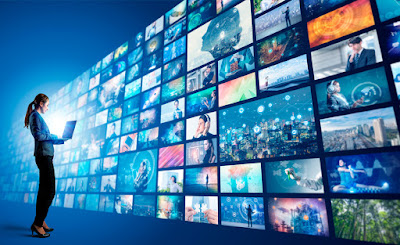 Do you like to read Entertainment news?  Then you should definitely visit to these most popular web sites, Which you can get, the more interested news.
Following entertainment websites, you can discover a bunch of news related to entertainment. Most of us enjoy Bollywood gossip, skin care routines, make-up and grooming tips. This website entertains you and provide information about Entertainment.

↣😃look below to know about most Tranding Entertainment websites in India.

ScoopWhoop is an internet media platform which provides articles on lifestyle, humour, travel, news and many more. You name it and they will probably have an article or a quiz on that topic. They also have a YouTube channel where they upload hilarious videos. Go check them out.

POPxo is an online community created by women for women. They have everything from lifestyle to beauty. This website has a targeted audience which are young urban women who want a little help in everything from wardrobe to hairstyle. POPxo has both text and video content on their website.

Pinkvilla is one of the biggest sources for everything Bollywood related. They cover Bollywood fashion, gossip and news. If you are a Bollywood junkie like all of us are, do check out Pinkvilla.

If I say in millennial’s term, this website is very “woke”. In other words, they pick up stories which entertain, educate, inspire and thrill people. They take up a very hard-hitting topic and cover a story about it. If you are looking for some raw and entertaining content, Storypick is the website to follow. 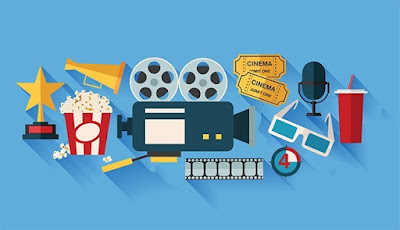 iDiva is relatively a new website and it’s already sitting on 2 million likes on Facebook. Website’s content focuses on relationship tips, fashion, health tips and a lot more. They provide both video and text content which is simultaneously humorous and informative. You should totally check out their video content as well, it’s a laugh-riot.

While most website focused on women’s lifestyle, MensXP came in to provide tips from dating to work life for men. They have targeted audience which as the name suggests are men. They also have a YouTube channel which has movie reviews. You SHOULD check them out.

One of the originals in the Bollywood news business is MissMalini. They cover popular Bollywood news, lifestyle & fashion and beauty tips. MissMalini’s YouTube channel has interviews with many celebrities. Follow them for the latest Bollywood updates.

Bollywood Hungama is everything Bollywood related. It is a website where you can read Bollywood movie reviews, gossips, latest pictures of celebrities and interviews. Also, their YouTube channel has really fun interviews and games with some of your favourite celebrities.

If you’re someone who has a thing about politics, The Quint is the site for you. They discuss the latest political, business and cricket news. They provide content in both Hindi and English, which is quite rarely found on other websites. Go update your knowledge at The Quint.

Film Companion has some of the most genuine and unbiased movie critics like Anupama Chopra and Suchtrita Tyagi. They review the latest Bollywood and Hollywood movies and interviews many big celebrities. Their website also has scripts of many Bollywood movies which is very helpful for young writers. Go check them out right now.

These websites gives you vast number of Entertainment News. Check them out to know more about what is happening in Bollywood, cricket, politics, business and others.

Entertainment is a form of activity that holds the attention and interest of an audience or gives pleasure and delight. It can be an idea or a task, but is more likely to be one of the activities or events that have developed over thousands of years specifically for the purpose of keeping an audience's attention.Although people's attention is held by different things, because individuals have different preferences in entertainment, most forms are recognisable and familiar. Storytelling, music, drama, dance, and different kinds of performance exist in all cultures, were supported in royal courts, developed into sophisticated forms and over time became available to all citizens. The process has been accelerated in modern times by an entertainment industry that records and sells entertainment products. Entertainment evolves and can be adapted to suit any scale, ranging from an individual who chooses a private entertainment from a now enormous array of pre-recorded products; to a banquet adapted for two; to any size or type of party, with appropriate music and dance; to performances intended for thousands; and even for a global audience.

The experience of being entertained has come to be strongly associated with amusement, so that one common understanding of the idea is fun and laughter, although many entertainments have a serious purpose. This may be the case in the various forms of ceremony, celebration, religious festival, or satire for example. Hence, there is the possibility that what appears as entertainment may also be a means of achieving insight or intellectual growth.

An important aspect of entertainment is the audience, which turns a private recreation or leisure activity into entertainment. The audience may have a passive role, as in the case of persons watching a play, opera, television show, or film; or the audience role may be active, as in the case of games, where the participant/audience roles may be routinely reversed. Entertainment can be public or private, involving formal, scripted performance, as in the case of theatre or concerts; or unscripted and spontaneous, as in the case of children's games. Most forms of entertainment have persisted over many centuries, evolving due to changes in culture, technology, and fashion for example with stage magic. Films and video games, for example, although they use newer media, continue to tell stories, present drama, and play music. Festivals devoted to music, film, or dance allow audiences to be entertained over a number of consecutive days.

Some entertainment, such as public executions, are now illegal in most countries. Activities such as fencing or archery, once used in hunting or war, have become spectator sports. In the same way, other activities, such as cooking, have developed into performances among professionals, staged as global competitions and then broadcast for entertainment. What is entertainment for one group or individual may be regarded as work or an act of cruelty by another.

The familiar forms of entertainment have the capacity to cross over different media and have demonstrated a seemingly unlimited potential for creative remix. This has ensured the continuity and longevity of many themes, images, and structures.
at June 16, 2020 No comments: